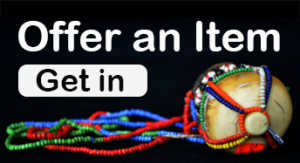 As many peoples of eastern Africa make headrests/stools, it is difficult to attribute these objects to specific groups unless they have been collected in the field. Most are three-legged with one side flattened.

Mack and Coote aptly describe the carving process as ‘opportunistic’, going on to say: ‘The simple forms produced by the Dinka and Nuer are often little more than the result of judicious pruning of a found branch to produce a three- or four-legged stool or headrest. Zoomorphic features, such as a tail and a head, are sometimes “brought out”.

Among the Shilluk, Westermann noted that neck rests were used by men so that their hairstyles would not be spoilt during sleep. Many East African pastoralists regard coiffure primarily as an indicator of status. Among these groups, a young man is entitled to begin wearing the distinctive coiffure that marks him as an adult only after he is initiated.

As each member of the age set rises through the hierarchical society, changes in jewelry, hairstyle and
feather decorations for the hair often mark each promotion. The use of headrests is often associated with this advancement and the headrests themselves become status symbols.

Whether this pattern is true for the Shilluk and Dinka is unknown, but it certainly seems likely as Shilluk men still wear elaborate coiffures, and among the Dinka headrests/stools are primarily used by older men (Jeremy Coote, personal communication).

The Dinka multi-purpose headrests/stools also provide a convenient place to sit as it is not considered proper for elderly men to sit directly on the ground.

No special skills were associated with the construction of headrests by the Shilluk and any man could make them alongside such activities as house-building and weapon-making. Headrests were made to resemble the forms of various animals, including ostriches and other birds. The symbolic importance of such objects is highlighted by the Shilluk belief that this headrest form was invented by Nyakang, their most important ancestor, culture
hero and the founder of the Shilluk dynasty.

The Anuak held that if the king-elect was able to balance on a three-legged stool during his investiture
the ceremony he was acknowledged as the rightful heir.